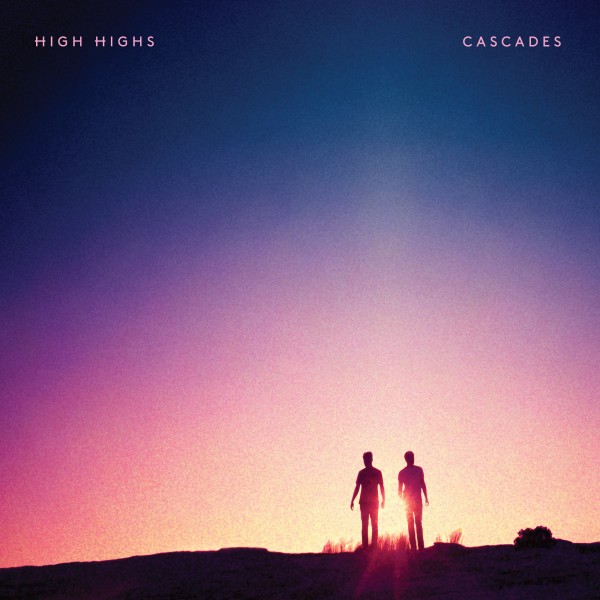 Cascades, the title of the second record from the Brooklyn group High Highs, could be read in a number of ways. It could be taken as a nod to the group’s hometown—the coastal Australian city of Sydney, which rests against the beautiful, blue Pacific Ocean. Or it could be a nod to the record’s sound, which retains the broad scope of the group’s debut, Open Season, but feels bigger, and grander – sheets of sound, raining down softly. In reality, though, the title is a memory – a moment Jack Milas and Oli Chang remember while driving through the Cascade Mountains on tour. The song it comes from, also called, “Cascades,” is bright and expansive, silver threads of guitar laced through soft layers of synths. It builds softly and steadily, Milas’s voice swooping up to an aching falsetto on the chorus, synths pooling gently beneath him. More than anything else, the song is an indication of how far the group has come in a short period of time – from working together in a recording studio in Australia to opening for Sky Ferreira and Vampire Weekend. Cascades is a portrait of a band in ascent, making music grand enough to carry them along the way.

“The first album was intimate,” Chang says. “We were piecing together ideas in a small space with guitar and voice. With this record, we wanted to make songs that were fuller, that would fill a bigger room.” Milas puts the same sentiment more succinctly: “We wanted to have a bit more fun.” That sense of freedom rings throughout the record. On “How Could You Know,” guitars streak across the background like shooting stars as Milas employs an elegant falsetto to convey longing and hope. In “Movement,” vocal harmonies ripple and sway over hymnlike synths; and “Fastnet” is a slinking, synthetic soul song, high, beckoning vocals gliding across tiny apostrophes of guitar. Cascades is the sound of a band stretching out, writing songs that feel purposeful, effortlessly melodic and full of grace and beauty.

It’s also a record that’s representative of their backgrounds. “We wanted to make an ‘Australian’ record,” Milas says. “We’ve been living in New York, but Australia is always home.” Chang agrees. “If you go to Australia, it’s a beach country,” he says. “You have year-round summer, basically. That really influences the music.” But the way it influenced them was almost counterintuitive. The group wrote and recorded much of Cascades in upstate New York, even if their mind was elsewhere. “When you’re in New York, you write a record about somewhere else,” Milas says. “We were in upstate New York, writing a record about Australia. It’s like when Steely Dan wrote Aja in LA, but they were writing about New York.” They also drew inspiration from the music of their youth – like the Australian synthpop band Icehouse and John Farnham’s booming arena-pop anthem “You’re the Voice.” “We were connecting with a lot of ‘80s Australian bands while we were making the record,” Chang explains. “Some of the songs come from that connection.”

They refracted those influences to create something uniquely their own. Working with a drummer for the first time, Sean Hutchinson, the songs became sweeping and cinematic. “We would work with Sean to get the basic rhythmic idea,” says Milas, “then Oli would take it and make it weird.” That’s evident in the slowly-rolling “Boxing,” where the drums are a blip on the radar, and in “Catch the Wind,” where they trickle and pop. Beneath the song’s soft musical sheen are lyrics that are abstract and striking – fragments of memories, glimpses of far-off places, unfinished conversations. All of them read like poetry on the page, as open and nuanced as the music itself. “We were just trying to distill a specific emotional feeling,” Chang says. “If you look at the page of lyrics, a lot of the syllables draw out and become part of the landscape. We treated the voice as if it was another instrument.”

All of these elements combine to make music that is soothing and soaring, reflecting the group’s love of club culture, but better suited to unwinding after the party than getting lost in the thick of it. “We just tried to make the record beautiful,” Chang says. “We weren’t trying to be edgy or difficult – we were striving to make it as epically beautiful as we possibly could. Hopefully when people hear it, it will make them think of something that’s important to them.” Drawn equally from High Highs’ past and present, Cascades is the record that points the way to their future.